Playing by the Rules: Not Just Fair, But a Legal Prerequisite 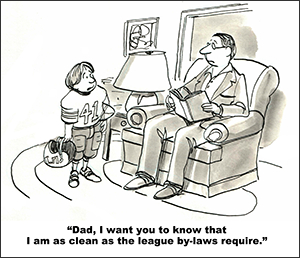 Far too frequently, the explanation for an action taken by a condominium or subdivision association’s directors, trustees or managers that, on its face, is obviously contrary to the association’s declaration, indenture, articles of incorporation, bylaws or rules, is the simple dismissive that “we’ve always done it this way for as long as anyone can remember.” Needless to say, if all interested stakeholders are in agreement with whatever action is to be taken, there is likely little then-present concern about the apparent violation.

But if someone does disagree with the action taken, and such disagreement appears to be happening more and more frequently, the result can be quite divisive to the community as a whole. Moreover, even if at the time the unauthorized action is taken there is no disagreement or outcry, that is not to say that it cannot be challenged at a later time.

At the time that each amendment was considered for adoption by the members of the association, being the lot owners, the quorum provision required that “a 51 percent majority of the lot owners … that are present at their … meeting shall constitute a quorum to conduct business.”

The court hearing Lake Arrowhead, having reviewed the record, failed to find in either the contested amendment itself or the minutes of the meeting at which such amendments were considered any evidence regarding the number of people present at each meeting considering the respective amendments. Moreover, the court noted that there was not even a recital that a quorum was present for each such meeting. The amendments in question instead contained only a “breezy recital,” which contrasted conspicuously with earlier amendments that unmistakably declared that a quorum to conduct business was present.

The evidence in the Lake Arrowhead case disclosed that the vote tolls never exceeded 172 out of 2,068 lots, well short of a quorum. Furthermore, while some members owned multiple lots, there is no credible evidence that the lot owners present at any meeting owned, in total, a majority of the lots.

Accordingly, while the court hearing Lake Arrowhead found that the association had the ability to enforce its restrictions, in this particular instance the association failed to prove that its indenture restrictions had been adopted by the requisite number of lot owners.

In the case of Taticek v. Homefield Gardens Condominium Association, the court considered whether a condominium association, having the power to adopt rules and proactively having adopted a rule placing limitations on the size of dogs and the means by which such dogs may be present within the common areas, has the affirmative duty to enforce such rules. The court did find that, having undertaken action within its powers to adopt rules for the Homefield Gardens residents’ “health, comfort, safety and welfare” the association was then under a duty to enforce such rule. Read more about the Homefield Gardens decision here.

A homeowners or condominium association is also governed by its bylaws. Missouri courts have held, as does Missouri statute in the case of condominiums, that an indenture or declaration trumps an association’s bylaws, and the bylaws take precedence over the rules and regulations. In the September 2017 decision in Davis v. Lakewood Property Owners Association, Inc. the Missouri Court of Appeals decided in favor of property owners in a case involving an increase in assessments. Without reciting in detail the formula for calculation of the maximum assessment without a vote of the lot owners — expressed in Lakewood’s declaration, and expressed again, albeit with slightly different language, in Lakewood’s bylaws — a base assessment was provided for during the initial year. Thereafter, per the declaration, the annual assessment could not be increased beyond one-half of the increase in the consumer price index (CPI) measured from the previous July over the prior year’s assessment.

While the bylaws provided essentially the same scenario as set forth in the declaration, the Lakewood board of directors had, for approximately 20 years, calculated a maximum annual assessment based upon the increase in CPI from the first year of the subdivision, rather than based upon the preceding year. It should be noted, however, that until 2015, the board had not exceeded the amount computed with reference to the CPI increase over the prior year.

In December 2015, the Lakewood board assessed an amount in excess of the formula set forth in the declaration. Challenged in its methodology, “Lakewood asserted that the board had been using the formula since its inception and that there was no conflict between the declaration and the bylaws concerning the calculation of the maximum annual assessment.”

While the trial court concurred with the Lakewood board’s methodology, relying in part on the business judgment rule to insulate the board from being found without authority to make the particular assessment, the Missouri Court of Appeals held otherwise. The appellate court, besides dismissing the errant reliance on the business judgment rule, found the bylaws at odds with the declaration, and thus, at least insofar as the calculation of the annual assessment, the action of the Lakewood board in assessing an amount in excess of one-half of the increase in the CPI over the prior year was unauthorized.

Understanding not only the applicable law but also how the courts interpret and construe that law to the particular facts of a subdivision homeowners association or a condominium association is not always an easy task. In fact, the law and its interpretation and construction evolve as more complex property use develops.

Guiding associations and individuals through the intricacies of both case law and statutes demands more than just a passing interest in the subject. I have more than 30 years of experience representing subdivision and condominium associations. Please contact me if I may be of assistance in helping you understand your rights and responsibilities.