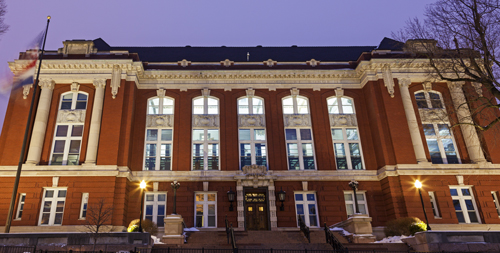 It has been well-settled law in Missouri that when it comes to indentures and restrictive covenants limiting the use of real property, the ability to amend such an instrument was to be restricted to only those amendments that lessened, alleviated or made such restrictions less harsh. The Missouri Supreme Court in the 1938 seminal decision of Van Deusen v. Ruth held that “[r]estrictions, being in derogation of the fee conveyed, will not be extended by implication to include anything not clearly expressed,” and accordingly such indentures had to be strictly construed.

Van Deusen, a case which rested, in part, upon special circumstances concerning those having the power to vote, nonetheless painted a bright line which for over 80 years has provided the legal underpinnings to prohibit an increase in the burdens imposed on the use of a private subdivision’s real property. Thus, the ability of a subdivision to add a tennis club as a common improvement and impose assessments in support thereof (Webb v. Mullikin, 142 S.W.3d 822 (Mo. App. 2004)) was denied, as was the ability of a subdivision to restrict the resubdivision of lots (Hazelbaker v. County of St. Charles, 235 S.W.2d 598 (Mo. App. 2007)), notwithstanding that in both instances the requisite number of affirmative votes had been obtained. A variety of amendments considered by my clients over the years, and discarded because of the Van Deusen precedent, is both great and varied.

The new owner of one of the lots in Clayton Terrace Subdivision wanted to subdivide the lot, which was permitted under applicable municipal ordinances. However, the 1928 amendment to the Indentures as restated and re-recorded restricted such action. As anticipated, the Van Deusen case reared its head, and without the Missouri Supreme Court revisiting the underpinnings of that earlier decision would have certainly resulted in the property owner achieving its goal of resubdividing the lot because the restriction limiting such was additional burden not contemplated at the time of the original adoption of the Clayton Terrace Indentures.

But the Missouri Supreme Court went back to the drawing board and started the analysis anew, recognizing that a “restrictive covenant is a private contractual obligation generally governed by the same rules of construction applicable to any covenant or contract, the principles of contract law apply when interpreting an indenture.”

Such an exercise of interpretation requires that, in interpreting the parties’ intent, the courts give the words of the contract their “natural, ordinary and common sense meaning.”

While courts will construe “any ambiguity or substantial doubt as to the meaning, restrictive covenants will be read narrowly in favor of the free use of property,” or in other words, any ambiguous terms “will not be extended by implication to anything not clearly expressed in them.”

In construing the Clayton Terrace case, the court focused on the indenture provision which stated, “The following restriction shall be enforced and binding upon the owners of this Subdivision for a period of 25 years from date of this instrument, unless amended or extended by two-thirds of the lot owners.” The court found that the use of the term “or” generally refers to alternative possibilities and is akin to the use of the word “either.” Construing the Clayton Terrace Subdivision Indentures, the court held that the “drafters provided that two-thirds of the lot owners could do two things — amend the list of restrictions that follow and extend those restrictions.” To “amend” means “to change or modify in any way for the better,” the court found, in reliance upon Webster’s Third New International Dictionary.

In construing this indenture provision as would a contract, the court held that “[i]t would be unnatural to read these words other than as expressing an intent that two-thirds of the homeowners could add restrictions to the list provided and could lengthen the time in which the original or added restrictions would be in effect, as both ‘amend’ and ‘extend’ inherently broaden the reach of the list of restrictions either in effect or in time.” While the property owner in this case argued that the word “amended” was insufficiently specific to predict the addition of restrictions without unanimous homeowner approval, the Clayton Terrace court expressly found that while Van Deusen’s results might have been justified in the context of the particular facts and the unique language of the particular indentures then being interpreted, the Van Deusen court’s reasoning was “suspect.”

The Clayton Terrace court rejected the earlier court’s interpretation of “amend’ to mean only “amelioration of the thing … without involving the idea of any change in substance or essence,” and stating that such was “far from the usual meaning of amend set out above, violates the subtle rule that words in an indenture ‘are given their plain, ordinary and usual meaning.'” Accordingly, the court expressly overruled Van Deusen and stated that that case “should be limited to its own facts, and has no persuasive — let alone binding — force under the present facts or in cases using different language.”

The Clayton Terrace court further added that phrases “added to” or “altered or amended” also mean just what they say, noting that “unless the use of the word amended in the context of a particular set of indentures indicates it is being used in other than its normal and natural sense, then ‘amended’ has its normal meaning — ‘to change or modify [them] in any way for the better.'”

With the burden of Van Deusen finally lifted from precedential law, homeowner and condominium associations will be free to amend their indentures, covenants, conditions and restrictions, and declarations merely upon obtaining their requisite number of votes in affirmation thereof, and provided that such amendment does not otherwise violate any other applicable laws. Whether such changes will be for the better remains to be seen, but certainly after 80 years denying majority rule in subdivisions, a vestige of democracy for “private communities” will be reinstituted.

My colleagues at Sandberg Phoenix and I have extensive experience representing community associations, subdivisions, condominiums, road and other associations. If we may be of service to you, please contact me to arrange a meeting. I may be contacted at [email protected] or 314.446.4278.