Voting Leave in Missouri: When Are Employers Required to Give Time Off for Voting? 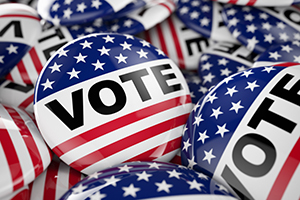 It seems like the campaign ads, especially the negative, bombastic ads, have been hitting all of us for months. Now the mid-term election is just days away (and then, fortunately, the ads will stop). Of course, regardless who wins the elections and what propositions are finally passed, there will be the post-election analysis and prognostications in the political equivalent of Armageddon.

In Missouri, four constitutional amendments and three other ballot propositions, plus local propositions that vary from county to county, are on the ballot. It can take a substantial amount of time to get through the voting process, with up to one-hour waits in the St. Louis area, for example. Obviously, being well versed on the candidates and issues will speed up the voting process. But you still have to find time to get to the polls if you don’t vote early.

Missouri law actually requires employers to give time off, under certain circumstances, to employees who want to vote on Election Day. It is important for employers to take measures to confirm they are not infringing upon their employees’ statutorily protected right to vote.

Thus, for an employee to be entitled to time off to vote, the employee would otherwise be required to report for work before 9:00 a.m. and would otherwise still be required to be at work on Election Day after 4:00 p.m. The three-hour period of voting leave provided by the employer may include time before or time after reporting for work, so long as the polls are then open.

The employee is entitled to receive his or her usual and customary compensation for such voting leave time, the Missouri attorney general having previously held that such compensation was to include overtime pay differential if such was the normal workweek schedule for the affected employee.

Understanding not only the applicable law but also how the courts interpret and construe that law to the particular facts of an employment matter is not always an easy task. In fact, the law and its interpretation and construction evolve as more complex scenarios develop.

Guiding businesses, both for-profit and nonprofit organizations, through the intricacies of both case law and statutes demands more than just a passing interest in the subject. Having more than 30 years of experience representing businesses and nonprofit associations, I can help you understand your rights and responsibilities. Please contact me at [email protected] or 314.446.4278.

“Any person entitled to vote at any election held within this state shall, on the day of such election, be entitled to absent himself from any services or employment in which he is then engaged or employed, for a period of three hours between the time of opening and the time of closing the polls for the purpose of voting, and any such absence for such purpose shall not be reason for the discharge of or the threat to discharge any such person from such services or employment; and such employee, if he votes, shall not, because of so absenting himself, be liable to any penalty or discipline, nor shall any deduction be made on account of such absence from his usual salary or wages; provided, however, that request shall be made for such leave of absence prior to the day of election, and provided further, that this section shall not apply to a voter on the day of election if there are three successive hours while the polls are open in which he is not in the service of his employer. The employer may specify any three hours between the time of opening and the time of closing the polls during which such employee may absent himself.”